Visiting customers is a rare luxury when you are working in a startup with customers spread over six continents. However, recently Fredrik Correa got an opportunity to visit and interview the Sollentuna Elite Volleyball team and reflect: 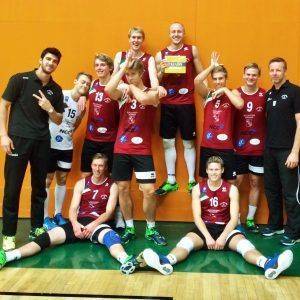 The implementation of flywheel training in team sports seldom goes from 0 to 100% overnight, but gradually grows into the programing in different ways. In the case with Sollentuna elite volleyball team, one of their players and current Strength & Conditioning coach, Carl Ljung discovered the kBox during his own rehab after a torn ACL. The physiotherapist at a local clinic used the kBox with great success and the interest for flywheel training in rehabilitation and performance grew over the years.

Carl and a few other coaches attended the Exxentric Summit this year and we started discussions on how to implement flywheel training using the kBox in their setting. After demos for the coaches and familiarization training with the players, they have now been using the kBox regularly for slightly over 4 weeks. I decided to visit their team training and see what questions they may have and how they implemented the kBox in this early stage and their plans going forward. Obviously, I wanted to interview a couple of the players too, to hear their story and what they think about training on the kBox.

Just walking into training hall itself, I noticed that the women’s team had just replaced the men’s team 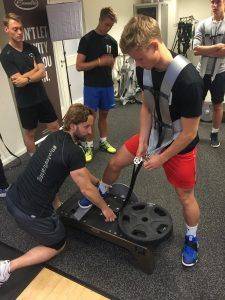 on the court and started their volley training, while the mens team started their S&C training. A hall full of action, energy and positive attitude. kBox was going hard all the time, working 3 and 3 in a circle of kBox power squats, med ball throws and sprints. Right there, I could see one of the big benefits of the kBox. While having access to a gym only two nights a week they can now add two strength and condition days when training at this facility by having the kBox there. There is absolutely no transition time to move over to another facility, and instead they can just get right on it in the court.

Cycling through a whole squad, it would be more efficient to have another kBox but it actually worked pretty well. Doing the S&C after volley training had a practical aspect since players can leave after they finished their training. When doing it before training, resting time and chatting increased and affected the start of the volleyball training. Now, everybody trained hard and didn’t lose any time messing around, both training wise and moving into competition phase. This is also probably beneficial from a physiological perspective.

I also sat down with two of the players after the training, 30 year old Kosma Smiechowski and 19 year old Jacob Zachrisson. Kosma had an interesting background being of Polish descent and coming from a strong Volleyball background with both mom, dad and grandfather playing on a national elite level. He grew up in Australia and has been playing there.

However, six years ago, his career almost ended due to a knee luxation. After ten hours of weekly rehab, he got back and has been playing in Sweden for three years. The knee joint isn’t giving him any problems playing volleyball but his flexibility has decreased in the gym. He also had back issues when lifting and previous patellar tendinitis and I was really interested to hear his thoughts regarding using the kBox.

I am glad that Kosma is very happy about the new addition to their training as he gained almost 5 cm in his flexion in the left knee and he experienced no problem whatsoever from the patellar tendon or back so far during pre-season training.

On the other hand, Jacob is in the beginning of his senior years as a player. He has played for Sollentuna since he started as a kid but attended the National Volleyball 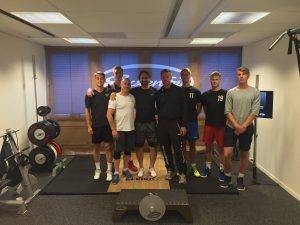 programme in Falkoping in high school and have just returned back to Sollentuna to play for the A team.

During his years in Falkoping, they did a lot of weightlifting but last winter he had some back issues that prevented him from doing cleans and back squatting. So far this season, he has had no problems with the back on the kBox. During the years when he had Volleyball on the schedule in school, they spent more time in the gym while now there is more focus on the play itself. He thinks he was stronger last year before the back issues so he likes the new pre-season programme with heavier focus on S&C. Being a rather short player, he knows his athleticism is important so the training off the court is an important part.

I’m glad that maybe the kBox can do this type of training a little safer, efficient and more convenient for the team and coaches in Sollentuna.

During the interview, the upcoming season premiere was discussed, where they met one of the favourites Linköping and the game was lost 3-1. However, Sollentuna won the home premiere against Habo in the recent games.

Currently, Sollentuna elite men’s volleyball are currently ranked 5th in Sweden and we wish them all the best in subsequent games. Warm welcome to the #Exxentricfam!