The choice of inertia and intensity are the main parameters affecting your workout in flywheel training. A new study just came out looking at how flywheels with different inertia affect work, power, force and eccentric overload in both genders. Here is a walkthrough of the study by Fredrik Correa, who stresses individualisation and revisits the Flywheel Workout Zones.

Still young but already a seasoned flywheel researcher, Rodrigo Fernandez-Gonzalo, together with first author Luis Manuel Martínez-Aranda have published their latest work and this time it’s a descriptive flywheel study, “Effects of inertial setting on power, force, work and eccentric overload”. It came out published-ahead-of-print in JSCR the other week.

I have been saying that we should leave this area of research and look more into training studies and programming. I would love to see some head-to-head studies looking at protocols instead of lab-based stuff that coaches cannot implement. However, that being said, I think this work adds some understanding of how inertia works and can be helpful in programming your training. What’s missing in the ahead-of-print version is graphs, tables and unfortunately readable formatting so we might have to go back to this one when it’s published if I missed something.

So, about the study. First of all, it’s a well written introduction giving a good background to the subject and I recommend reading it if you are somewhat new to flywheel or isoinertial training. It also points out an important weakness in flywheel training research since the inertia adopted in studies have always been mentioned without any deep thought and studies looking at how the inertia affect the training parameters like power, work and force. Identifying weaknesses in the research is just as important as looking for evidence in my opinion.

What did they want to study?

The researchers wanted to examine how different inertias affect:

Another good aspect of this study is that Fernandez-Gonzalo is one of those people that understand the importance of having both female and male subjects which is rare in flywheel research. One earlier publication of his on this topic is one of the few and I recommend you to check out that one too. You will then see why studying both sexes here are important, not because from a gender equality standpoint but from a more physiological one.

Eleven men and eleven women did unilateral and bilateral knee-extensions with a flywheel device at different inertias ranging from 0.0125 to 0.1, that is a factor x8 between “lightest” and ”heaviest”. That range covers the span that has been used in previous research. (As a side note, the kBox allows for inertia ranging from 0.01 to 0.280, or factor x28, with the kBox4 which is industry leading.)

Tests were of course preceded by a standardized warmup and throughout the testing, there was a regular ”vocal feedback” (i.e. test leader screams ”harder!!!” in your ear basically). During the testing session with different inertia, they measured the force with a force sensor, power calculated from inertia and rotational measurements, unfortunately with an unvalidated system that never appeared in peer-reviewed-research before. They use electro-goniometry for angular positions.

The test itself consisted of three maximal CON-ECC reps preceded by one pre-rep. I would have preferred two pre-reps myself like in our #kBoxPowertest since we see that affects output. However, they did six test sets in total so I guess they wanted to limit the amount of work the subjects had to do ”outside” the data collection.

In all tests, the men performed significantly higher values (power, force, absolute overload) besides in relative overload (%). No surprise here.

For both sexes, there was a power drop from the lowest inertia to the highest but the men showed a higher % drop than the women (36% vs 29%). Higher inertia resulted in higher work (logical from a maximal contraction and same amount of reps and ”distance” covered but with a longer time under tension and slower speed).

When it comes to forcing, both CON and ECC forces increased with increasing inertia. Surprisingly, mean forces in both CON and ECC increased more in relative terms in women than in men but men showed larger increases in peak force. Men also showed a tendency towards increasing eccentric overload (%) with increasing inertia from 0.0125 to 0.0375 where they had their max. But from inertia 0.0125 to 0.05, it decreased in women. In absolute terms, the eccentric overload didn’t change for women between the different inertias (and as a result, the % overload decreased when CON force increased) while it increased in men.

Higher SCC use was seen in both sexes with low-medium inertias and men had overall greater SCC usage compared to women. SCC usage was the greatest for both sexes at inertia 0.0375 kgm2. 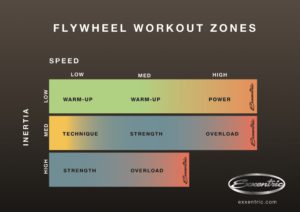 Eccentric overload can be achieved with any of the studied inertias in this exercise. However, men have a greater capacity for eccentric overload than women in absolute terms and it increases with increased inertia. In women, the overload in relative terms was the greatest at the lowest inertia (i.e. higher movement velocities). Looking at our Flywheel Workout Zones model, you might think there is a discrepancy. However, actual overload in absolute numbers are the same for women at higher inertia and overload is higher for men so if you are chasing high forces and overload, I would say go for more inertia.

The take-home message from this study in my opinion is that individualisation is important. Assess your athletes or patients and use this information to guide you on inertia settings and re-assess regularly. Since most flywheel users out there are not doing knee extension but squats, deadlifts and other closed chain exercises on devices like the kBox, I would use this information for what it is and not extrapolate to any drill or device. For example the external moment arms change much during the CON phase in the squat which allows for a higher force and power production in the end range compared to a knee extension which can give a different force-velocity, power and eccentric overload profile with increasing inertia. Lets hope this study can inspire some applied researchers to dig deeper into this area!