Today, we’re happy to announce that our co-founder Fredrik Correa is taking over as our CEO, with the aim to secure the continued growth of flywheel training across the globe. Read the full news release:

Fredrik Correa has been appointed CEO of Exxentric AB. Fredrik replaces Erik Lindberg who instead becomes Executive Chairman of the Board.

Eight years after the founding of Exxentric, the company is undergoing a change of management. The change is part of the rapid development that Exxentric is undergoing. Over the past five years, annual growth has averaged 65% and the company is now taking new steps in making people healthier and stronger.

“I am very pleased that Fredrik has accepted the challenge of leading Exxentric in the company’s continued growth. Since Exxentric’s founding, Fredrik has been a constant driving force in the development of all parts of the company, most recently as head of product development. His solid knowledge in technology, training, physiology and medicine combined with a visionary and actionable leadership makes him an ideal CEO in the continued expansion that Exxentric is facing”, says Erik Lindberg.

Fredrik has been studying at the Royal Institute of Technology, as well as the Swedish School of Sport and Health Sciences, where he took a bachelor’s degree with a focus on ice hockey. Studies in physiology at the Karolinska Institute subsequently led to medical studies and work as a MD at Danderyd’s Hospital where he became a specialist in 2016. Fredrik was one of the founders of Exxentric AB in 2011 and from 2017 he has worked full time in the company. 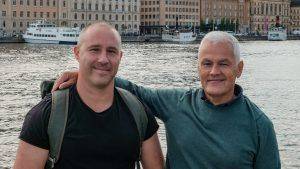 After seven years as CEO, Erik will instead assume the role of Executive Chairman of the Board with responsibility for, among other things, strategic planning and investor relations. Erik has previously held leading roles at Apple and Lexmark, as well as several start-up and scale-up companies.

“Erik has during his time as CEO, under rapid and profitable growth, developed Exxentric from start-up to globally established market leader in our niche. As chairman of the board, his broad experience in international business will be very important in the continued development of Exxentric as a world-leading innovator and supplier of high-quality strength training products and services”, says Fredrik Correa.

It does not get more sport specific than @tysonros

Raise the function of your off-hand while still de