Last week a new systematic review and meta-analysis on the effect of flywheel training vs traditional weight training made quite some impact on the sport science community. Fredrik Correa has taken some time to read and digest the 29-page article to explain the study outcomes a little further than beyond the abstract, offer some input and also a peek into ongoing research by institutions like CESSCE (pictured).

What’s all this fuss about?

If you have been following and reading flywheel science until now, this meta analysis won’t surprise you. If you have been using the kBox and have hands-on experience even less so. All studies so far comparing flywheel vs gravitational loading (weight stack devices primarily) have been in favor of flywheel so no news here. There are one or two studies not favoring flywheel, however those are about the conic pulley version which is completely different from the type with a symmetrical shaft like the kBox. In one of those studies they are comparing different drills too, so you can’t really say anything about flywheel vs weights there either. If you been following us for a while you might have come across the Meta-analysis on FW and effect on power, strength, mass and horizontal and vertical force production by Henrik Petré, an unpublished MSc project. It contains about the same number of studies but that isn’t a comparison against weights. You can read about it here if you missed it.

Before digging into the recent publication I want to just set the baseline here with explaining eccentric overload to clarify what it means in articles, what people think it is and what it is in reality. In all flywheel training articles the overload has been of the delayed eccentric action type. This means you accelerate all the way through the concentric phase but don’t resist until after you passed first 1/3 of the eccentric motion. By doing this you are overloading the latter 2/3 of the range of motion since you have to absorb the same amount of energy as you produced over the whole concentric phase but in a shorter period of time.

If you look around when people tweet or post about eccentric overload you can see all kinds of things like super slow eccentrics spending 10-12 s in ECC phase, basically more isometric than eccentric action, at least if we compare to the eccentric actions done during athletic performance. So, eccentric overload to me is ECC load > 1 RM concentric. If you are doing 2-1, ie. “2 legs up and 1 leg down” with a submax weight I’d say you shifted ratios, with more eccentric focus, but if that load isn’t > 1 RM concentric it is not eccentric overload training. If you are talking about eccentric training (not saying eccentric overload) I think that is a broader term which could permit super slow chins and push ups with bodyweight. I think they are a waste of time however, instead increase the load and do (fast) overloaded eccentrics because that is the trigger you are looking for. Chris Beardsly wrote a nice piece on fast vs slow eccentrics.

In reality however, when using the kBox, the ways you can overload are much wider than what is seen in these studies. You can use a stronger movement pattern in CON like doing a “squat-hinge” as our US friends call it or the terms I prefer “overloaded RDLs” or “deadlift into RDL” (as performed by Mike Young in the pic above). RDL is weaker so if preceded by a powerful deadlift it will be overloaded. You can you use accessory muscles like pushing off with arms in the squat in CON and absorb it with the legs or have a coach pulling you up adding extra energy for you to absorb. So this study is looking at flywheel training with a partial overload in eccentric ROM vs training with traditional weights, nothing else. The adaptations coming from the more powerful overload methods with higher contraction velocities haven’t been studied head-to-head yet but if we compare more overload and over the whole range of motion with regular CON:ECC 1:1 using weights, I know where my money is. You can read up on the kBox overload methods here.

What did the study show? 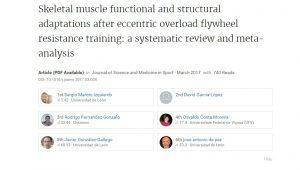 Now, back to the important new meta-study by the mainly Spain-based team of Sergio Maroto-Izquierdo, David García-López, Rodrigo Fernandez-Gonzalo, Osvaldo C. Moreira, Javier González-Gallego and José A. de Paz.. However, if you are still reading you probably want a little more info so here goes.

The authors searched the databases and found 97 studies so flywheel might still have a lot of question marks around it but to say there is no research is wrong. Anyway, based on their inclusion criteria, 9 studies with a total of 267 subjects were included in the analysis. All these studies are FW vs weights, ranging from 4-10 weeks, with healthy young people or athletes ranging from 6-8 on the PEDro scale meaning all are classified as high quality. The average age for FW groups was 25.8 yrs with a very asymmetric sex distribution since only one study involved women. Exercises included in these studies were leg press, leg extension, leg curl, squat from lower limb and two studies included exercises targeting shoulder abduction, arm extensors and flexors. In the flywheel devices the overload was provided with delayed eccentric action as described above. 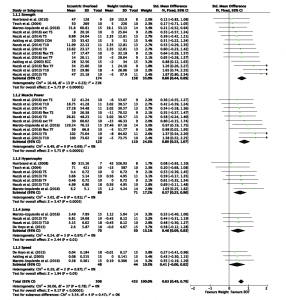 Here is the forest plot. If you want to interpret it yourself you can find a guide here.

Basically, all studies are placed under the respective outcomes they wanted to look at, strength, power, hypertrophy, jump, speed. The Standard Mean Difference on the far right shows difference between FW and weight training groups with an average to the right of the vertical bar meaning difference between groups favoring FW (ie more effect). Studies are weighted, so a larger study has more impact than a smaller one. All studies are weighted and put together in the row with the big black diamond. As you can see all studies favor FW on all outcomes with power and strength being the most obvious. 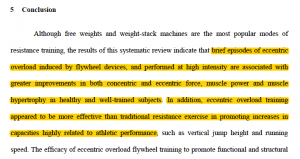 The article provides a good discussion around the results and also mentions a few other interesting studies(not included in the meta analysis) so I recommend you to read to full text if you want to get more details here. I’ll continue with my own comments below.

So is flywheel proved to be better than weights now?

Looking at this it is definitely more effective than weights at least if you are training young, healthy male athletes. When it comes to women, we have no reason to believe they wouldn’t benefit from FW training but all the evidence isn’t there yet. Future studies including women are needed in my opinion. This meta-analysis included 3 women out of 276 subjects in total. Sport science have to do better than that.

How can this be applied? These studies are basically single exercise drills and not a part of a training program so we actually don’t know (in a scientific sense) how this works in an environment with a much higher total training volume and with parts of concurrent training. Still, by adding FW to a well designed program it’s hard to see a negative effect coming out of this. Coaches afraid to train their athletes too hard by adding FW training can have this as evidence to replace some of the training with barbells with more effective flywheel training.

What we are missing are also more closed chain exercises involving multiple joints like squats, deadlifts and split squats. What we see from our users are also different types of overload with more overload and over the whole range of motion. This is probably an effective stimulus for adaptions in these outcomes but future studies have to quantify it. Adding flywheel will cause some muscle damage and fatigue early on but adaptation is fast and muscle markers for damage don’t seem to have a detrimental effect on adaptation. You can read more about on this subject here in an earlier post.

Last but not least, the flywheel device is only a tool. It needs to be properly used for strong positive effects. I usually say that training on the kBox doesn’t get you strong if you don’t train with that intent. Lousy training is still lousy on a flywheel device. The benefit of the kBox is that it makes it easy to train really, really, hard and that is what triggers the adaption. The overload. So to be more effective, incorporate flywheel and take part of our material and courses and you will be up and running in no time with your FW training and enjoying your gains.

What more do we need to know?

What I’d like to see is more studies looking at specific populations so we can prescribe training more effectively, depending on training age, strength, sport etc. As mentioned above, studies on more closed chain drills and realistic and complete training programs to help us with periodization are needed. FW might be better but what is optimal, we don’t know yet.

Besides this I think physiotherapy can benefit a lot from using FW training since patients need to get stronger, more powerful and with good timing, since time saved is important for good flow in the health care system and getting people back to work. However, before we see a massive surge of FW in the physiotherapy clinics we need more clinical studies on specific diagnoses and conditions.

Studies using the kBox are being done right now or starting soon in Canada, US, UK, Sweden and Holland. The topics involve all three main groups, athletes, patients and the general population. I know at least one publication on physiotherapy hopefully coming out this spring. Without saying too much I can say the kBox was in favor over the golden standard treatment for a common problem among athletes in sports involving a lot of jumping.

Besides these research projects we are in discussion with other researchers so the list will be longer later this year. We try to understand the problems or questions our users have and one of my tasks is trying to get the researchers to look for answers. I hope that we will see more studies that we are able to apply in the field that will help us with protocols, periodization, loading and in-season training.

Feel free to reach out to me if you have any thoughts around this you want to discuss.

For further reading on the scientific support for flywheel training, look here.

Giving Back to Local Sports Clubs: Where It All Started

Become the strongest version of you! 💪 Comple

Friends that overload eccentrically together stays

Focusing on stability and control to build even mo

Gains 🤝 #kBox4 There are few exercises that ar

Quad 🔥 Are you tired of regular squats? Challe

"Rome was not built in a day" 😎 You already kn