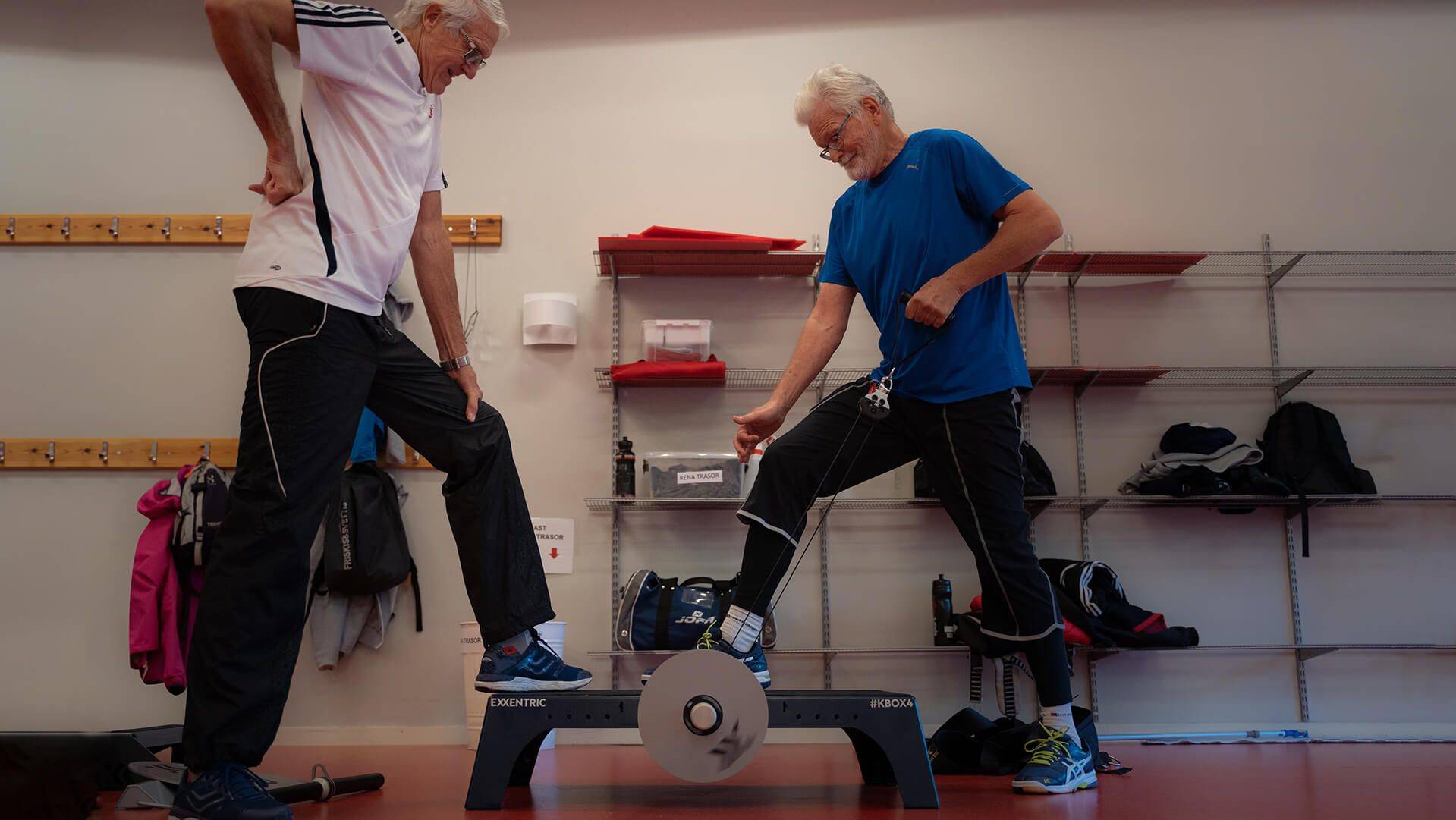 With their variable resistance and low impact, the kBox and the kPulley are highly suitable for strength training for older adults, both during rehabilitation and for general health and fitness.

The personal trainer or clinician working within the older adult demographic must have a comprehensive toolbox to serve clients with a wide range of physical conditions and performance levels, including pain, mobility, and many other presentations. Thus, flywheel training on the Exxentric kBox and kPulley is a versatile and effective choice to treat many of these conditions.

When seniors perform strength training, it is important that they can perform:

A detailed research summary with relevant scientific references about how to do and the benefits of strength training for seniors/older adults was published by Ph.D. Scotty Butcher et.al. (Sept 2016).

The applications of flywheel training for seniors are to a large extent similar to the general population for health & fitness. Also, in rehabilitation, the kBox and kPulley are used by many physiotherapists working predominantly with older adult clients.

Beyond the benefits described on those pages, specific applications for seniors include:

The variable resistance of flywheel training makes it superior to free weights or dumbbells and weight stack machines when it comes to resolving the problem of sticking points.

An example of such a problem is squats with a subject who is very weak in the lower end of range or who suffers from arthritis in the hip or knee joint, making it difficult to load in some specific angles. With the kBox there is no sticking point and subjects can go deeper in the squat as the load is determined by how hard you push. In this way, you can have a deeper range of motion and a light squat in the bottom and a heavier squat in the end range squat where the subjects are usually stronger.

The drill high pull is another example where the subject may previously have had problems. For example, when the fingers/wrists/shoulders cannot produce a high enough force in certain angles or position of the drill in the concentric phase. In this case, the subject can start spinning the flywheels by bending and extending the legs, then follow the movement with the arms through the concentric phase and break the force in the eccentric phase, where the subject is much stronger. This creates a training stimulus.

Another superior benefit with the kBox is that the subject can be ”self-supported” to create eccentric overload which has been proven through research for seniors to efficiently develop e.g. tendon stiffness and power (Onambele 2008, see below).

The kBox and the kPulley offer everything from the low force, low-speed training up to high forces, power training, and the possibility of everything from pure concentric contractions to eccentric overload. All this provided in a safe, soundless, and ergonomic way and with no risk of accident. With a small, mobile device like the kBox it also fits easily into a smaller clinic, where space is limited or even the client’s home when convenient.

Using a computerized feedback system such as the kMeter, you can monitor effort and power output, following progression over time. This is also helpful if you want to limit movement range or load. Visual feedback can also be a great motivational tool.

The kBox and the kPulley use flywheel technology which offers variable resistance, less need to shift weights and a force output that is determined by the client, which gives an effective and safe workout that has a lower risk of injury. The variable resistance also gives a variable lever offering a smooth resistance throughout the exercise, strengthening the muscle over the whole ROM. Also, the ROM is easily adjusted if you want to limit the depth of certain exercises e.g. a squat, where you can prevent your client going beyond certain angles (watch video).

The harness automatically distributes the pressure from the load equally over both shoulders and also reduces torque on the lower back if the client’s technique isn’t perfect. This is helpful for beginners as from the first day in the clinic, you can start doing squats and other functional lower limb exercises even if the client is completely new to the type of lift.

The eccentric load is widely accepted as the most effective way to treat tendinopathy and it has never been simpler than on the kBox and kPulley. Using different types of methods you can create a significant eccentric load in all possible exercises.

Go back to Applications or proceed to flywheel training equipment.