As the launch approached for the kMeter feedback system, we invited the leading US based track coach and strength training innovator Chris Korfist to try it with his athletes. Here, he generously offered to share his thoughts with us. 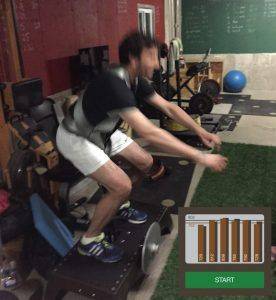 One of the big jumps that I made as a track coach was my purchase of an electronic timer. After suffering through some lesser systems, I settled on a Summit timer and two Alge beams, wired. I now had instant feedback on how my athletes were running.

Giving athletes instant feedback on how well they do changes everything. From a psychological standpoint, it encourages flow in a workout. Thanks to Mihály Csíkszentmihályi’s work,* we know that instant feedback encourages individuals to improve faster. It also gives athletes the feedback to see if they are improving or not, which further encourages a positive training environment. And for coaches, it also helps to see if what you are doing is improving your athletes’ abilities.

What happens in the weight room?

The problem for a number of years was that while timers could help your athletes on the track, what happens in the weight room? Max weights are great but not always conducive for all phases of work in the weight room. If coaches are concerned with power output, we know we need to work at a much lighter range. I started with the MuscleLab and progressed to GymAware. Both great but we know that using barbells is not the best method of developing power in the weight room due to lack of eccentric activity.

Enter the kBox. Everyone who has tried the kBox will agree that after using it, traditional barbells feel like “dead weight”. The kBox feels alive. But the problem is how to quantify what you are doing on the kBox. That problem was solved with the new app that measures everything that happens on the kBox – the kMeter. 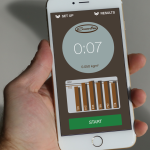 The kMeter module that attaches under the kBox uses Bluetooth to connect to your iPad, IPhone or other iOS device. I use a HDMI cable to connect the iPhone to a TV so the display gets much larger. So, as the athletes are exercising they get immediate feedback which they don’t have to search for on a small screen. Visual response is much more immediate than a coach yelling out numbers.

I set the number of reps and weight. There is a 2 reps countdown to get the wheel moving and then the big beep, it is go time. As they exercise, a graph and number show their output. If you thought the kBox was difficult before, wait until you put a number on your effort. After your last rep, a new screen pops up and shows a whole range of info, which includes average power, which is displayed while exercising, concentric and eccentric peak power in Watts, average overload, energy, reps, rep time average, and estimated force in Newtons.

So, I have been recording outputs for my athletes with the smaller flywheel (get better power output). While it is fun to have competitions between athletes, it is more interesting for me to make connections between what people can do in real life athletics and what they are putting out in exercise.

So, if an athlete generates x Watts on a kBox, he can also run x time in the 40 m or jump x inches in the vertical jump. My first observation is that my more explosive athletes tend to generate more power as the set progresses. So my sub 30 inch vertical usually hit their best number early in the set and sometimes completely collapse before the set has ended. Their top rep will be 3. The more explosive athletes continue to ramp the power, so their best reps are at the end. I am guessing what happens is that they can convert the eccentric energy into concentric better and continue to ramp up the output. They usually hit their peak by rep 6-7.

Also, the weaker guys can’t take that much eccentrically and collapse or slow down or lose their groove. So, someone who falls into this range may have a concentric average of 836w and eccentric average of 858w and an overall average of 620w. Their vertical jump is 24.4 inches. An athlete like this would benefit from eccentric work with weights, or an overload on the kBox, by helping him standup quickly (assisted) and getting him to absorb the force. On the other end of the spectrum, I have an athlete who puts out 1824w concentrically and 2194w eccentrically with an average of 1378w. He has a 37 inch vertical jump. 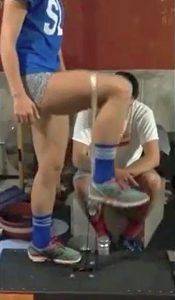 I think the most interesting aspect of the kMeter that I have found is that even though someone’s power may not be that great, it is more about the relationship between the concentric and eccentric and this is something that correlates to athletic ability. For example, I have an accomplished high school distance runner who has a concentric peak at 710w but eccentric is 890w, 543w average and 23 inch vertical. While not as fast as a sprinter, he does very well at what he is trained for, distance running. The athletes who lack the eccentric strength are not “athletes”, meaning they are not smooth in movement.

I also use GymAware for my traditional weighted movements and have found that as athletes’ kMeter readings improve, so does their power outputs on the GymAware. I usually mix the two during a workout and add some movement that gets them off the ground. So, if we are doing single leg work, it would look like kBox single leg squat, GymAware single leg squat to single leg jump off a box.

As the weather has warmed up here in Chicago, I will get an opportunity to match kMeter reading with running times and try to make some more correlations between the two. If you want to visit Chicago this summer, we are hosting a Speed Clinic on June 19-20. For more information contact me at [email protected].

Chris has been coaching track for 22 years in Illinois, US. He has coached high school athletes at Hinsdale Central, Downers Grove North and York HS, producing 59 all-state track athletes, three individual state champions, two team state champions, three 2nd place team finishes, and two 3rd place finishes. He owns the Slow Guy Speed School which is a gym that focuses on running and athletic development from which other all-state athletes have trained. He used to run the Inno-sport.net and Wannagetfast.com web sites with athlete coach Dan Fichter. He also had the opportunity to work occasionally with some Olympic sprinters and other professional athletes.