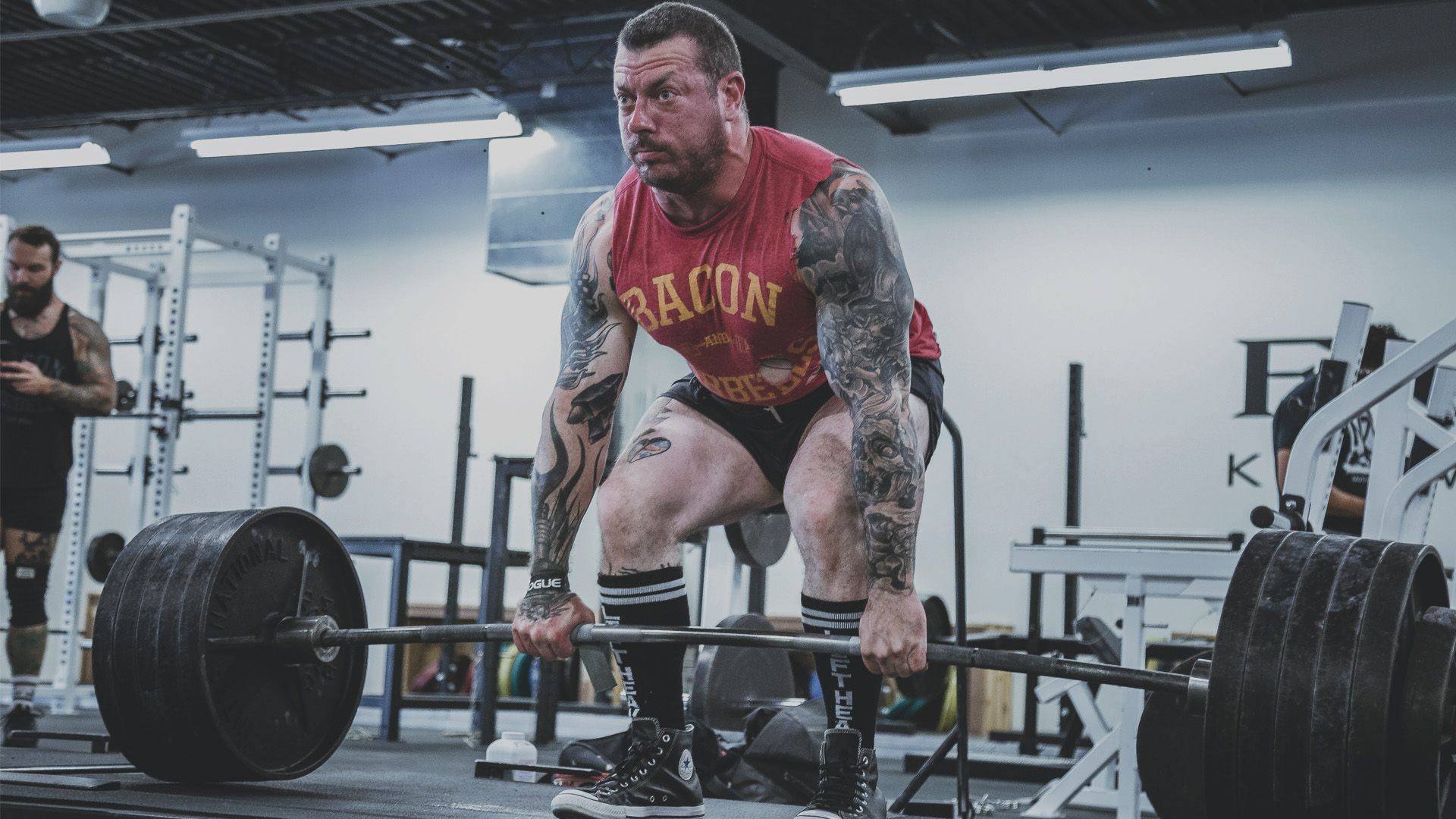 Powerlifting is a competitive sport where athletes compete to lift weight in the squat, bench press, and deadlift combined or in bench press only. Flywheel training with the kBox and the kPulley can be incorporated into powerlifting training to optimize athletes’ strength and assist with accessory movements that contribute to the three main competitive lifts.

Participation in classic powerlifting where competitors don’t use any aids is on the rise but the traditional form, otherwise known as equipped powerlifting, where athletes use knee wraps and special squat or deadlift suits to assist, is still widespread and today athletes are split approximately 50% across each. Many different federations exist with rules differing slightly between each one with IPF, International Powerlifting Federation, being the biggest one.

Powerlifting is one of the few sports where athletes can compete at a high level even at older ages as there is a well-established system with age categories up to the age of 80, sub juniors (15-18), juniors (18-23), open (any age) and Masters categories (40+). Combined with strength training being more popular and scientific evidence showing that we can maintain or even build strength at higher ages, there has been a big increase in competitive athletes in the sport, including the masters’ categories.

Powerlifting training obviously focuses predominantly on the main lifts or variations of them. It also includes accessory exercises for warm-up, improving technique issues, or rehabbing around injuries or preventing them. Typical accessory lifts are seal row or cable row, Bulgarian split squats, and good mornings, exercises that can be performed either in the kPulley and the kBox. Training usually cycles between different phases, roughly the non-competitive or preparation phase, and the competitive phase. In the preparatory phase training consists more of general exercises, lower weights, and higher training volume where a competitive phase usually progresses gradually in weight and quality of the lifts and focuses more on the competition lifts and less on the variations. Flywheel training with the kBox and the kPulley can of course target all aspects of powerlifting training in both phases.

When it comes to powerlifting, the Advanced Flywheel Knob is the perfect accessory for producing higher forces in powerlifting athletes’ main lifts. With higher inertia and maximal output, they can build strength without worrying about any sticking points. The extra inertia will also increase your push-off strength in the deadlift. This will be caused by a longer and tougher eccentric phase in your lifts and a heavier transition from eccentric to concentric. With a higher inertia, the motion of the drills will be slower and more controlled. This accessory is designed to be particularly useful for strongmen, powerlifters, and weightlifters among other similar types of athletes.

Powerlifting athletes compete at every level from local or regional meet-ups to national and international competitions and world games. However, there aren’t any pro leagues so most athletes remain amateurs and require a day job of some kind to support themselves.

Powerlifting is rarely your first sport. Usually, there is a transition from other sports where athletes found a talent and passion for the strength training exercises. Powerlifting also attracts people that engage in regular strength training in health and fitness gyms who want to take their training to the next level and focus on the main lifts. With this background, you can understand that powerlifting training that might look very similar between athletes from the outside is actually very individualized due to different strengths and weaknesses, previous injuries, biomechanics, age, competition technique, or style. That’s why you can find a wide range of equipment in a well-equipped powerlifting gym and beyond barbells and weights, you can typically find dumbbells, chains, resistance bands, cable machines, cardio machines, and also plate loaded single exercise machines.

The kBox and kPulley combined with the advanced flywheel knob accessory can have multiple applications in powerlifting.

Variable resistance and overload possibilities with flywheel training allow for safe overload and intense training for example in the deep portion of the squat. Building strength in the deeper angles without having to carry a heavy barbell through the whole range of motion can also alleviate the back from some work. As a result, training volume may even increase or at least be more focused on the actual aim.

Peaking before competition usually consists of lower volume, higher intensities, and more rest. The kBox can be incorporated perfectly in this setting as the high loads are safe and easy to achieve.

Using kBox and kPulley for the majority of the general exercises around the main lifts can both improve intensity and results of the training thanks to variable resistance and overload but also save time and allow for either more training for the main lifts, technique work, or more rest. With the possibility of adding general training outside of the gym, in the home setting, even a full-time worker can achieve a decent workload over the week and the time spent in the gym can be more focused on the powerlifting specific exercises.

Training around injuries is something most powerlifters have to do at some point. With heavy load and training focused on a few lifts, a bad shoulder or back can significantly affect the training quality. During those times, to be able to work hard and unload the back or shoulder is a great advantage and you can return from an injury even stronger than before.

Go back to performance sports.

SCROLL TO EXPLORE
What if you could boil down every rep, set, exerci

📣 Introducing our biggest app update ever! 🤓