Imagine that you have no feeling from your elbows to your fingers and no feeling in your hips, legs, and feet! Imagine that you were completely healthy until you were 48 years old, used to conduct hockey practices on skates, and then gradually you lost all the feeling and a lot of the functions in your arms/hands and your leg balance. Mårten Fredriksson explains: 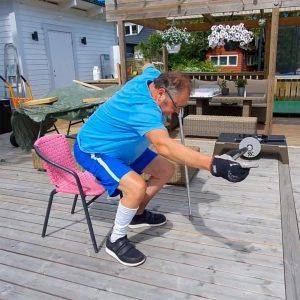 Polyneuropathy (PNP) is a term used to describe a physical state where peripheral nerves lose some of their ability to function.

PNP impacts, among other things, sensory and motor nerves with consequences such as difficulties with walking and tendencies of falling. Distal muscle weaknesses and atrophy of the feet and lower legs are common as well. 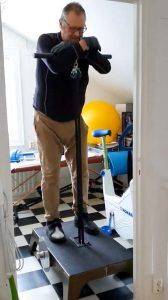 Lars G, who is now 68 years old, has gradually over the past 20 years lost muscle mass, function, and feeling in his arms and legs, he has fallen multiple times on some occasions causing serious injuries such as a broken left tibia. Since a while back now Lars G has been working with strengthening his body and muscles in order to push off the inevitable side effects of the illness. His goal is to recycle his muscle mass, to become stronger in the muscle mass that he has left, to activate the motor nerves, and increase tendon stiffness which are all important components of his current balancing issues.

Lars G is working with “big” exercises where he gets to use muscles connected to multiple joints and thus is challenged to produce and develop muscle force in balance requiring everyday movement patterns.

Lars G is aiming at the goal to push the level of disability as long and as far off as possible in order to enable himself to be independent, and able to move and choose what he wants to do without any personal assistance and various assisting tools. He has hung up his skates but with strength training, he hopes to once again be able to experience cross country skiing through nature during the early spring. 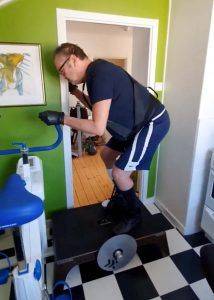 5 Reasons why Lars G is using a kBox and Flywheel Training as a workout.

Polyneuropathy affects 123 people among 100.000 in the population, in Sweden that is approximately 12,000 cases in the whole population.

Read more about it (in Swedish) here. 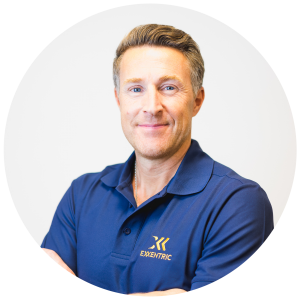 Last chance to get a 500€ gift card with the new