The latest version of the kMeter App has now rolled out, including several new features solely based on user request. Fredrik Correa explains:

This release is special since all new features are solely based on user feedback and suggestions. After talking to different users I came across various interesting questions such as:

– “My athlete stopped one rep short of the set so the last rep was spoiled, how can I edit that?”

– “I want to do a unilateral drill but work both sides in one set but during the switch I loose a couple of reps, is there a setting for this?”

– “Our facility has multiple kBoxes and we would like to spread the user data (not the training data) over multiple iOS devices, how can we do this?”

Given that my answers would have normally been either “there’s no such feature” or “this would need to be done manually”, these questions made me realise our app’s limitations and how it could be improved.

Before you continue reading and start pulling your hair. We understand these new features are slightly more complicated than previous ones, so we compiled a .zip file containing instruction and templates for importing users here if you need it. 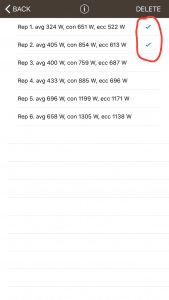 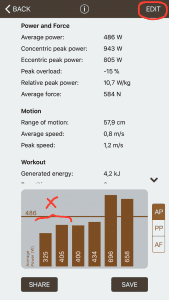 After completing your set and viewing your summary you can now press ‘EDIT’ and you will get a list over every rep (not the pre-reps) in a list. Here you can select the reps you want to discard and they will be taken out of the summary and your metrics will be re-calculated based on the data without those reps.

So if your athlete stopped one rep too short or lost balance in the 2nd rep you can easily just click that one away and save the data like before.

As for the second question, if you want to do 10 single arm rows on each side, you can set up the app with two pre reps and 22 training reps. You start with your two pre-reps followed by 10 training reps and then you switch over and do two (pre-)reps with the another arm and the following 10 training reps. Before saving you will have to discard those two extra reps in the middle of the set (rep 11 and 12) after you switched arms. Watch video.

If you are using the kBox with a whole athletic department of a bigger team and use multiple kBoxes and iOS units, the user data would have been quite difficult to set up. Not anymore. 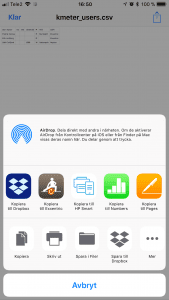 Now you can set up a .csv file with all you users and import it from an email, google drive or iCloud. You still have to approve every user but it’s much faster and you can send out the .csv to the other coaches for them to add in their devices. When doing this we also added the function to delete users to clean up your user list. Here is a step-by-step guide how to set up the .csv file (or download our templates) and how to import them. Watch video.

We had our multisystem users in mind when we added the import function but sooner or later deleting users would be required too, so we added that feature in the Set Up > User menu. Just select the users you no longer need to track and press delete. Watch video.

These improvements come on top of the current kMeter features that were already available before today’s release:

For a quick demo of the new features check the full video below.

Thank you for your feedback, keep it coming! Now, go download version 2.3 of the kMeter now on iTunes.