Basketball is a sport where you don’t necessarily have to be the fastest to succeed and James Harden of the Houston Rockets has been demonstrating that all throughout this season as well as his entire career. Here’s how flywheel training on the kBox can help to unlock your potential on the basketball court, as changing speeds is not just about your explosiveness.

To anyone that doesn’t follow the NBA, James Harden has just wrapped up a historical season leading the league in assists, while averaging a stat-line that hasn’t been seen since Oscar Robertson and producing the most points per game for his team since Wilt Chamberlain in 1961-62, all while leading his team to the third best record in the NBA. Simply said, what he’s accomplished this season is amazing.

I remember how at one point during the season I was listening to a podcast where it was quickly mentioned as a side note that P3 Applied Sports Science, who have worked with over 100 NBA players, measured James Harden’s athletic abilities and found out that he was average to below average in most categories. While being one of the best basketball players on the planet, his physique certainly doesn’t stand out as much as that of LeBron James or Russel Westbrook. So, finding out that he’s not one of the most athletic players in the NBA is definitely not a surprise. But knowing this, what is it then, besides the cognitive portion of the game, that gives him such an enormous edge over the rest of his peers in the NBA?

It turns out that James Harden is elite at decelerating, according to Marcus Elliott at P3. His exact words are “Harden is barely average in almost every metric we look at related to athleticism, except for deceleration metrics, and in those he’s one of the best athletes we’ve ever measured in any sport — in soccer, football, or basketball.” Anyone who’s ever played basketball knows how important change of pace is but when striving to become better players, both athletes and coaches often focus on acceleration and explosiveness. Yet by decelerating quicker than your opponents you can always gain an advantage in the open floor as well as in short spaces on the court, which Harden has clearly been demonstrating all throughout his career. 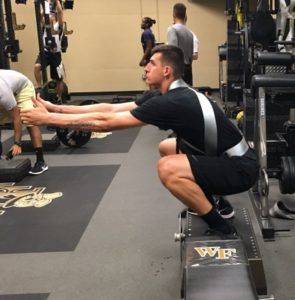 The link is clear between an athlete’s ability to decelerate quickly and his or her eccentric strength (i.e. absorbing a large amount of force during the extension of the muscle, e.g. on the way down during a squat). So, anyone striving to gain an advantage on the basketball court would not want to miss out on an opportunity to build eccentric strength in their leg muscles. Of course that’s possible with weights but not always practical and effective in a team environment. On the contrary, basketball players of all sizes can train together and push themselves as much as they can handle by doing squats, lunges, RDLs and hip adduction/abduction on the kBox among other exercises, without having to adjust the weight on a barbell, its positioning in terms of height or worrying too much about technique.

Plus, the kBox will not only help you to improve your ability to stop before your opponent can even react, but it’s also great for improving your sprint speed and vertical jump, it’s widely used to prevent and rehab from injuries and it can help you get better at changing direction quickly, through lateral squats for example.

James Harden’s team, the Houston Rockets, are already kBox users and so are the Oklahoma City Thunder, the Los Angeles Lakers, the Chicago Bulls, the Boston Celtics and the Sacramento Kings in the NBA among other clubs in various pro leagues around the world. It seems that gradually the basketball world is embracing the kBox and how much it could add to your game, so don’t fall behind the rest of your competition by reacting too slowly. Control the pace. 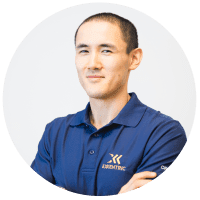