Read this amazing story from blade runner and Paralympian Antonio Flores, describing how the kBox allows him to perform resistance training in a manner he isn’t able to with traditional weight training.

My name is Antonio Flores, I am a 29 year old podiatrist and I am a blade runner, training for the paralympics. I was born with a club foot, which until 2010 qualified me as a paralympian but with no issues such as pain and discomfort. From 2010 till 2016 my foot deteriorated, which resulted in me having to stop training. The only option to resume running was to opt for an amputation. In 2017, I underwent an elective unilateral below knee amputation to be able to resume training, and so began my new journey.

I am relatively new to the kBox4, having only been using this system for the past few months. Despite not being a veteran of flywheel training, I have experienced enough to note substantial benefits.

Following my amputation, I soon realized what my limitations were going to be in regards to resistance training. Having a prosthetic foot mainly differs than a sound limb in regards to the range of motion (particularly in the ankle) and lack of balance/coordination. This combination of limitations result in either the inability to perform an exercise properly or not being able to load the right muscles adequately. The perfect example for this is when it comes to training quads and performing squats. 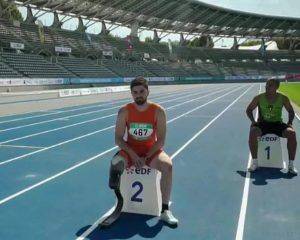 I soon realized that performing barbell squats which were heavy enough to cause a stimulus were somewhat of a risk. I, like most amputees, have issues squatting without bending quite a bit forward. My squats often look like a hybrid between squats and good mornings. This puts a substantial amount of stress on my back and if I shift slightly forward in the bottom of the squat, I would lose balance and almost tip over. Training with the kBox4 allows the user to squat whilst holding on to a stable object (such as power cage pillars) to assist balance even whilst working with maximal effort. In my case I prefer to do squats with the hip belt as this allows me to hit the quads maximally even though I might lean forward, unlike having a bar on your back, where the weight is shifted to my back.

There were a few modifications and considerations which were made when training with the kBox4 being an amputee, however these were few and far in between. The major issues were related to unilateral work. Being an amputee having a bias for the sound limb is to be expected. This bias makes it a bit difficult to train equally unilaterally. This however can be bypassed by monitoring the reps on the kMeter. Another minor issue I found is with the harness. The harness is designed to distribute weight on the shoulders and around the waist, however since it is impossible for me to squat upright I end up having the weight shifting to the waist/hip making it feel like a hip belt.

As a blade runner, my training sessions result in  forces which can be very stressful on the body. Most of the these forces are either absorbed by the muscles efficiently to allow for a safe and stable gait pattern, or the running form crumbles which results in an unstable,  inefficient running technique. Ever since I started training with the kBox4, apart from progressing significantly in kBox4 parameters, my track performances improved. I soon realized that with all of the eccentric training that I was going through resulted in me rarely ever being sore after a track workout. Let me tell you, there is nothing worse than waking up barely able to walk from a grueling workout and having to go to the track for an equally brutal one.

I would like to conclude by saying that despite the fact that the kBox4 was not made specifically for individuals with impairments, the device can be utilized by most people from all walks of life. I can honestly say that it has more than met my expectations. I look forward to gaining more experience with this system and to benefit from it’s unique adaptations.

Proceed to learn more about flywheel training for Paralympic athletes.

Skiing season is upon us⛷ Make sure that you h