For Exxentric, it has been a successful and eventful year, with more new customers around the world than ever and a successful launch of the kBox 3. Here is a recap of our year and an outlook at 2015, by our co-founder M.D. Fredrik Correa. 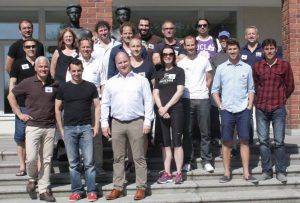 2014 was an intense year. Among our best experiences was starting a new tradition with the Exxentric Summit in Stockholm in May with participants from all over Europe. Our distinguished guests made it a very fruitful couple of days. We made many new friends and got new ideas for coming products and improvements. Afterwards we got a lot of positive feedback and, yes, we aim to make this a recurring event.

We also moved into the US market with a new local distributor as well as a reseller. It feels great to now be able to serve all the US athletes, coaches and institutions interested in flywheel training. In a short time our skilled partners have spread the concept of flywheel training widely in the US and connected with lots of great people in our field. The step to enter the US has also made a big impact as several articles about flywheel training on the kBox have been written by some of the very best strength and conditioning coaches, Chris Korfist and Carl Valle. We were even asked to write an article presenting our story and our concept of training in one of the most influential blogs for track and field coaching. 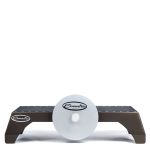 As you might have noticed, at the beginning of December we launched the highly anticipated kBox 3 and started shipping it, initially to partners and key users. We are thrilled that so many of you have appreciated the improvements that we have been working hard with during this year. We believe that the new kBox 3 has set the standard for closed chain, multi-exercise flywheel devices with its increased versatility and ease of use.

During the first weeks after launch, your demand for the kBox 3 even outstripped our production pace. From January 2015 we will be going at full capacity at our new production facility in southern Sweden in order to minimise your wait for delivery.

On the scientific side we have seen growing buzz about flywheel training and eccentric training during 2014. We were overwhelmed by your interest in the article we shared showing the huge increase in start speed for swimmers who made flywheel lunges first (the Post-Activation Protocol). Articles and pods covering the topic of eccentric training are also coming at a steadily increasing pace, and we have started to share the best of them with you on social media (including our Facebook and Twitter profiles). Also, we’ve been really proud about all of you kBox users who are sharing images and stories about your flywheel training. We try to share and pass on as much as possible. If you tag your posts with our name we’re sure to find it (or use hashtags such as #kBox3, #flywheeltraining or #exxentric). Our prediction is that you will read a lot more about flywheel training in 2015, as researchers, coaches, athletes and personal trainers realise its potential when you want to get effective eccentric training in a safe way. 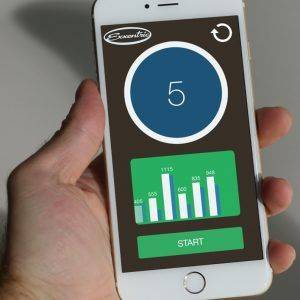 As we look forward to 2015, we have many things to get excited about. For example, in the not too distant future we will present you with an app-based and wireless feed-back system for the kBox! I can’t tell you much more about it but it is being tested right now in real training situations and will be launched in 2015. To the right you can see a preview of an early version of the app. The solution will be backwards compatible, so all earlier kBoxes with a SmartCoach sensor will be compatible with this new app solution. SmartCoach continues to be the tool for the professional coaches among you, while the app is developed to enchance the experience for those of you training on the kBox yourselves.

Also, as some of you already have seen, we’ve started to rework our web site, and there’s more to come. On the product side you have given us lots of ideas for development, and our ambition is serious. I can’t go into specifics but we can tell you that our R&D department has got a heavily increased budget for 2015 thanks to your increased interest in the kBox. This increase is aiming at presenting new products as well as accessories during 2015, so stay tuned!

Wishing you all a Happy New Year!

Let the world be your playground! 📸 @dd.welln

Life is about the "little" things 😎 Accessory

🌶🌶🌶 up things a bit in your garage gym an

The road to 300kg starts with the #kBox @fredrik_c